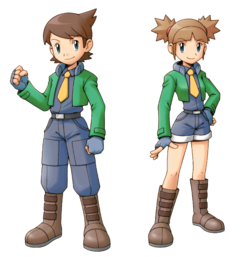 That gonna be the hardest one (since it looks I need to do it the legit way)... I just considered that I would had to hatch the Odd Egg until I would get Shiny Smoochum... since normally chance for shiny is just too low to get it fast (last time I got shiny that way was... ~1 month ago, and the second-to-last was so long ago that I don't remember the date, and actually it was first with 1 to 8192 chance), and breeding for shiny Smoochum is impossible due to that no Pokémon before RSE had any Pokémon that were in Human-like and another group (was considering chain breeding from Red Gyarados... as Generation II is capable of breeding for shiny). Also, wtf is with counter on talk of main page? It says 290 out of 289 for GS Back sprites (both shiny and non-shiny) Marked +-+-+ 14:33, 8 September 2011 (UTC)

Hack in? Impossible, I can't find codes (for shiny) for JP Crystal, only English, and I don't think if there is stuff like Advance Map, but for Generation II in Japanese. I don't know if it's possible to trade Pokémon from English eg. Yellow to Japanese Crystal (as international trade was implemented in Generation III). Also, acidentally uploaded file under wrong name and it was impossible to move file as there was redirect there ._. (and I know that you are Senior Administrator) Marked +-+-+ 15:39, 8 September 2011 (UTC).

Wait. lolwut I just could use Jynx from English Crystal to trade it to Yellow, then to JP Crystal (since I managed to link Yellow to JP Crystal... it's Japanese, due to everything in Japanese and party being other than English games). YEEEES. Marked +-+-+ 16:06, 8 September 2011 (UTC)

That's great! Yeah, I knew about my promotion. I was talking to PsychicRider on AIM at the time anyway (the person who promoted me). Carmen handled the image you uploaded under the wrong name. I don't think inter-language trading is possible in Gens I and II either (although your testing seemed to prove that). Also, I think the Shiny Ditto glitch would have saved a bit of time if you have Japanese R/B/Y, but hacking is easier of course. --SnorlaxMonster 04:51, 10 September 2011 (UTC)

Although a bit late...

Thanks for getting the two templates (mva and aba ones) approved. I appreciate it. For the two parter moves such as Aipom being hit by Flash, how do I handle those? I did start on some of them. Pattyman 15:34, 11 September 2011 (UTC)

Well, for that one, the name should be File:Roserade Flash Aipom.png (no pun intended). Even if it is a Pokémon being hit by an attack, focus on the user. For images with multiple moves being used, just put another template on for each move. --SnorlaxMonster 15:38, 11 September 2011 (UTC)

What's the policy on animated sprites? Are we doing those for DPPt/HGSS or BW? There seems to be some people uploading the Gen IV animations - how are those getting created? --Jdthebud 07:35, 11 November 2011 (UTC)

All sprites with the prefix "Spr" should be animated (if they are animated). Pure number filenames like File:001.png are not. I don't know how it is done (you're better off asking someone doing it that question), but they must all be uploaded as animated PNG files. --SnorlaxMonster 12:12, 12 November 2011 (UTC)

Should the filename of this image stay as it is or can it be moved to Flamethrower? There wasn't really any evidence of it using Fire Spin. Pattyman 19:05, 23 December 2011 (UTC)

Yeah, it should be moved. Unless someone checks the original and it was Fire Spin (based on this, I've already checked the dub), it should be Flamethrower. --SnorlaxMonster 01:10, 26 December 2011 (UTC)

There isn't really any reason not to link them. TCG isn't linked because, well, it would be a huge effort to do it. Ideally, both would just use summary templates (which I intended to make once). --SnorlaxMonster 13:31, 1 January 2012 (UTC)

Eh, I see it as redundant then... in any case, once the MediaWiki glitches and whatnot are fixed, then it really isn't necessary since the page where the file is linked to is already seen. ht14 21:02, 1 January 2012 (UTC)

I am going to need some help in this category with filling in missing summaries and moving some of the images to their necessary file names (the ones that are used) as I won't be able to do them all on my own. Pattyman 18:28, 31 January 2012 (UTC)

Well, if she did get a category it would be under her English name of elder anyway, but since even rivals like Georgia don't get their own category, I don't think she needs one. --SnorlaxMonster 10:55, 13 June 2012 (UTC)

Are you planning on reuploading those soon, or are they permanently being deleted? If it's permanent, than could you please give me a copy of the files? I would really appreciate it. Thank you! --Abcboy (talk) 01:51, 17 August 2012 (UTC)

No, we weren't planning on reuploading them any time soon. Because the images are unused GIF images and we don't have all the different stages (only the Berry-bearing stage), we decided it was better to get a new rip and get all the stages together as PNGs (and hopefully animated). Our French counterpart has all of the images we had and several more. --SnorlaxMonster 12:14, 19 August 2012 (UTC)

He keeps on uploading images without licensing them and putting in the summaries even though he was warned three times. Pattyman (talk) 18:22, 18 August 2012 (UTC)

Hey, could you please move that page to "ÓË e ÁiSprite.png", since this is the real name and the other one is an emulator error? TheOriginalOne 20:07, 20 August 2012 (UTC)

Just use it's regular sprite. After it's finished evolving it should use it again. --SnorlaxMonster 05:10, 9 September 2012 (UTC)

Here it is. Please state your opinion on it. For use on prerelease images as seen on Prototype Pokémon and characters. --Abcboy (talk) 16:31, 22 September 2012 (UTC)

Can you pass on this edit to user rights I think would be good? No mainspace edits to all users sort of like the File: namespace back on Bulbapedia. --Abcboy (talk) 23:57, 22 September 2012 (UTC)

I don't understand what you're asking. Could you read over your message or rephrase it? --SnorlaxMonster 03:23, 23 September 2012 (UTC)

Have you noticed how most users can't edit File: or File talk: on Bulbapedia? This is the same thing except for the main namespace, because practically everything here is in the File: namespace. It also would curb vandalism. --Abcboy (talk) 03:27, 23 September 2012 (UTC)

The existence of Category:Texts makes locking the mainspace here an issue. I thought it would be a good idea, but people higher than me want to keep the Archives open for storing texts as well, and a single spammer isn't really enough justification to lock the entire namespace. The learnset namespace was something TTE was trying to set up ages ago, but nothing came of it, not everyone really liked the idea, and he has since been permanently banned.--SnorlaxMonster 08:28, 23 September 2012 (UTC)

Can you restore the image of Burgundy's Stoutland using Tackle? I found a good use for it somewhere and reuploading it wouldn't be necessary. Pattyman (talk) 19:12, 12 January 2013 (UTC)

Seeing as I've been chewed out for jumping the gun on my templates before, I was hoping you would give my Box Wallpaper template a final look over before it gets moved to the mainspace. - Chosen of Mana 22:29, 11 March 2013 (UTC)

I removed the align=center as it is already width=100% so doesn't need aligning. Also, you shouldn't be using align= anymore anyway; it's depreciated HTML and the new code is detailed here. The reason this is important is a while ago we updated MediaWiki and it didn't recognize align= and all our template alignments got messed up, so we're gradually trying to replace it. Otherwise, the template looks fine. --SnorlaxMonster 08:08, 12 March 2013 (UTC)

I left a message before on the Science and Pokémon: Pokémon eggs talk page about the fanmade sprite of Skitty and Wailord, unless you were aware about it. By the way, thank you for deleting those redirects of the moved files. Pattyman (talk) 04:32, 27 May 2013 (UTC)

I believe this user's talkpage needs to be deleted since he is a sockpuppet. The block was already taken care of, just letting you know. Pattyman (talk) 03:36, 10 June 2013 (UTC)

Hey man, I have been tackling the Candidates for moving and I noticed a bunch of glitch Pokémon's sprites need to be moved to the new standard. Great! Except, when I tried to move these four images: File:Gmp1.png, File:PokedollarGlitch.png, File:RBGlitchFA.png, and File:YGlitchCD.png, it said the destination filename was taken. I didn't move them yet cause the other pics look different so I didn't want to mess around with anything (I know some glitch Pokémon can have common sprites but it's not something I am super knowledgeable about) anyway, since you are project leader, I was wondering if you could help me out with this or point me in the right direction. Thanks!! --ZestyCactus 21:53, 16 December 2013 (UTC)